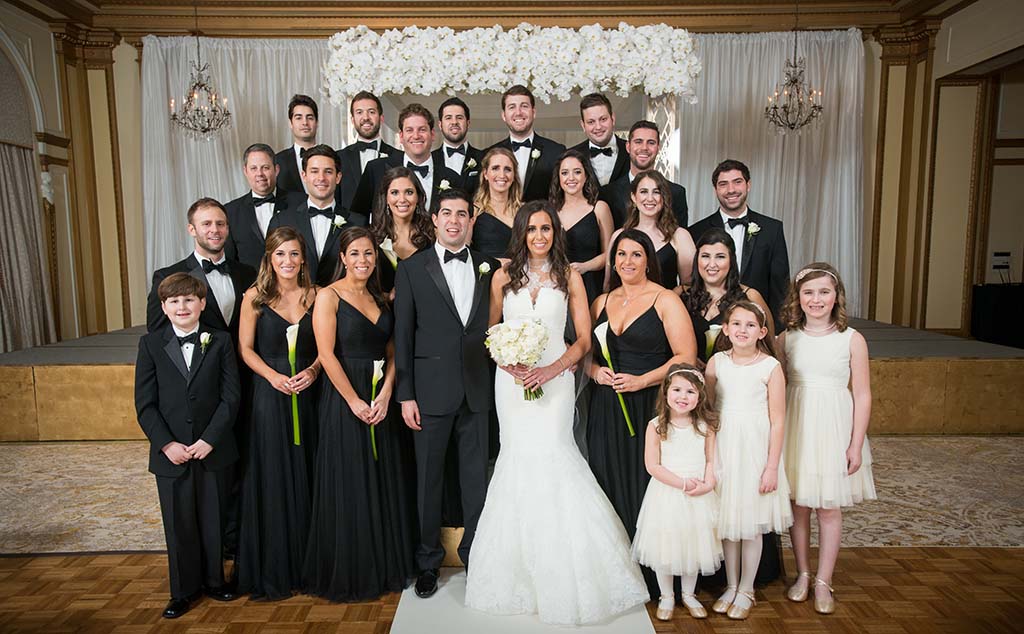 Jaclyn Knopf and David Bragman met at dinner in Chicago with a group of mutual friends from Memphis. 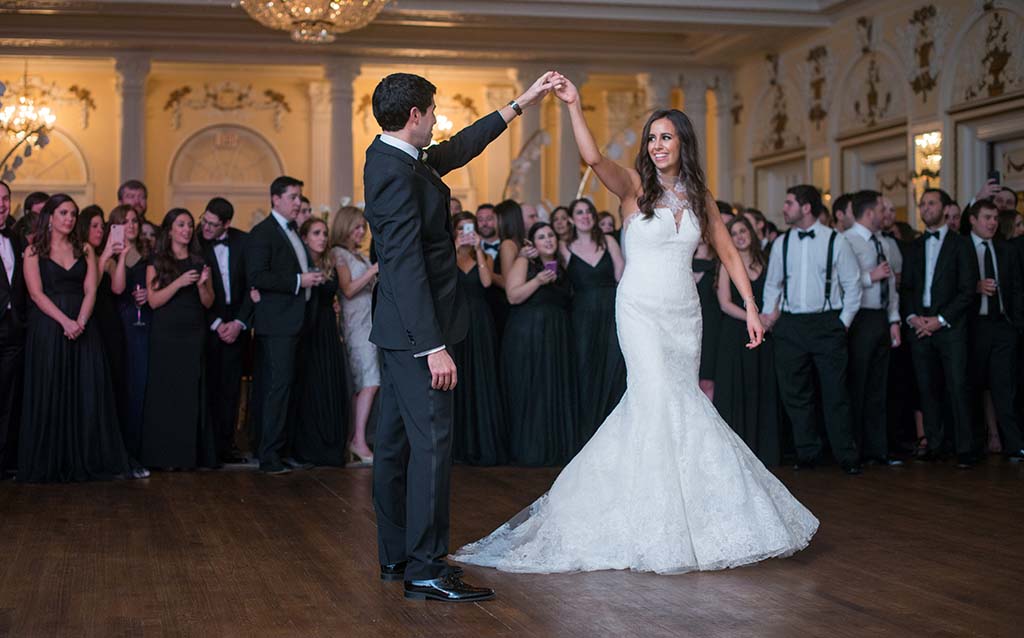 The Bragmans danced to Perfect by Ed Sheehan

“It was all about Jewish geography,” said David, who had been living in Chicago for nine years after graduating from the University of Georgia. Jaclyn, then a student at Indiana University, was in Chicago visiting friends. “We had such a great time together that evening, went out on a date the next night and have been together ever since.” The meeting, friendship and the marriage that followed were obviously meant to be. 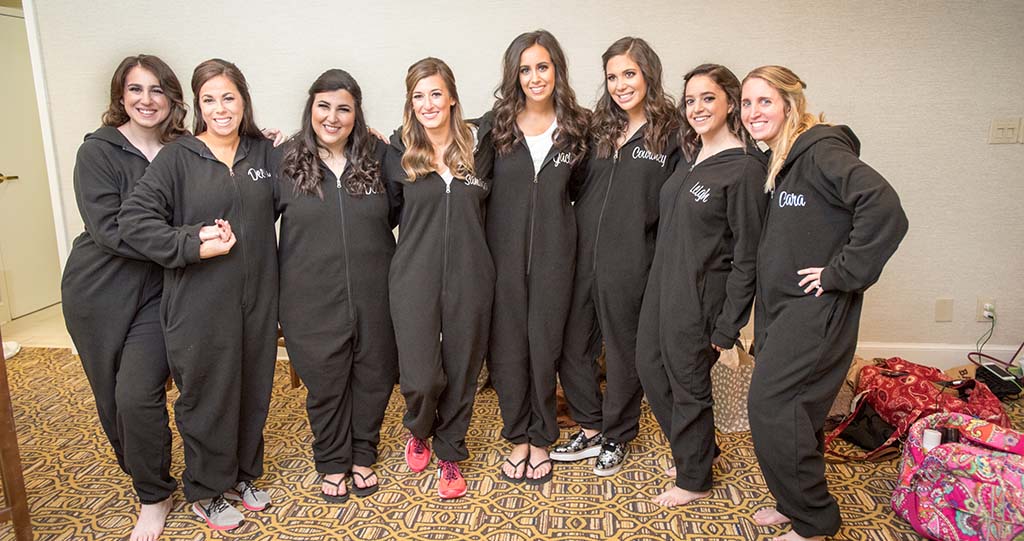 The bridesmaids stayed warm and cozy while being pampered with hair and makeup.

Living out of town during the planning was not as daunting as one may expect. “Thanks to technology, everything was pretty seamless and easy,” said Jaclyn.  “As the youngest of three, my mom had already gone through the wedding planning process, first with my brother and then my sister. After her incredible experience with my sister’s planner, Janis Kiel, we knew that we were in good hands.” 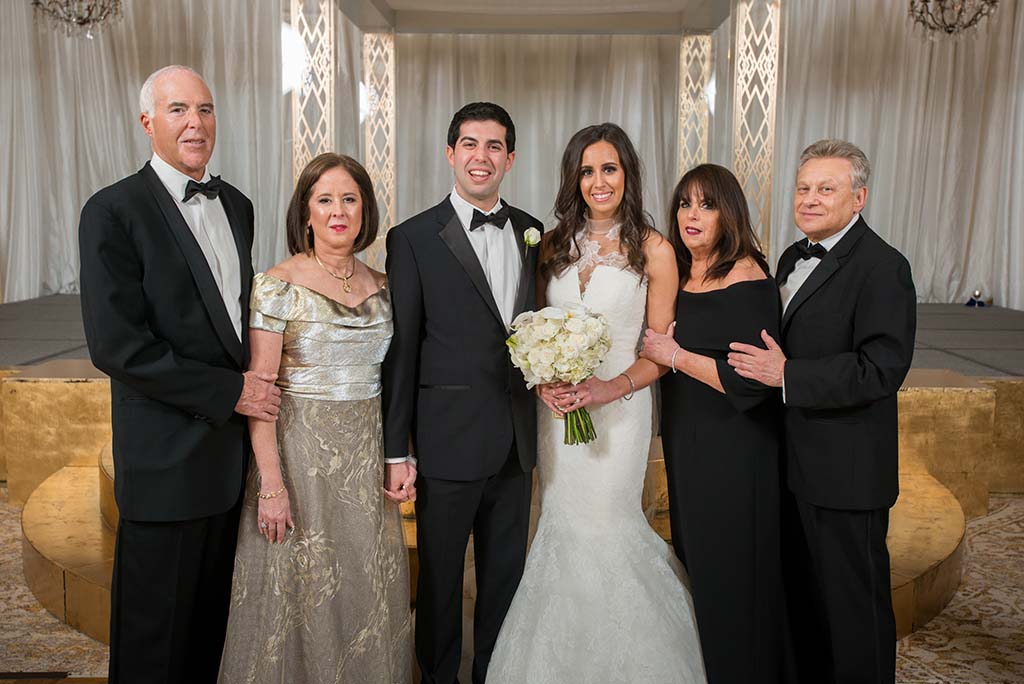 “When our daughter, Deena, wanted to plan an early January wedding, we were a little overwhelmed,” said mom Shelly Knopf, who with her husband, Irwin, own and operate Robert Irwin Jewelers. “Obviously, that is an extremely busy time of year for me and Irwin. Janis was incredible at keeping things flowing seamlessly throughout the entire process.” 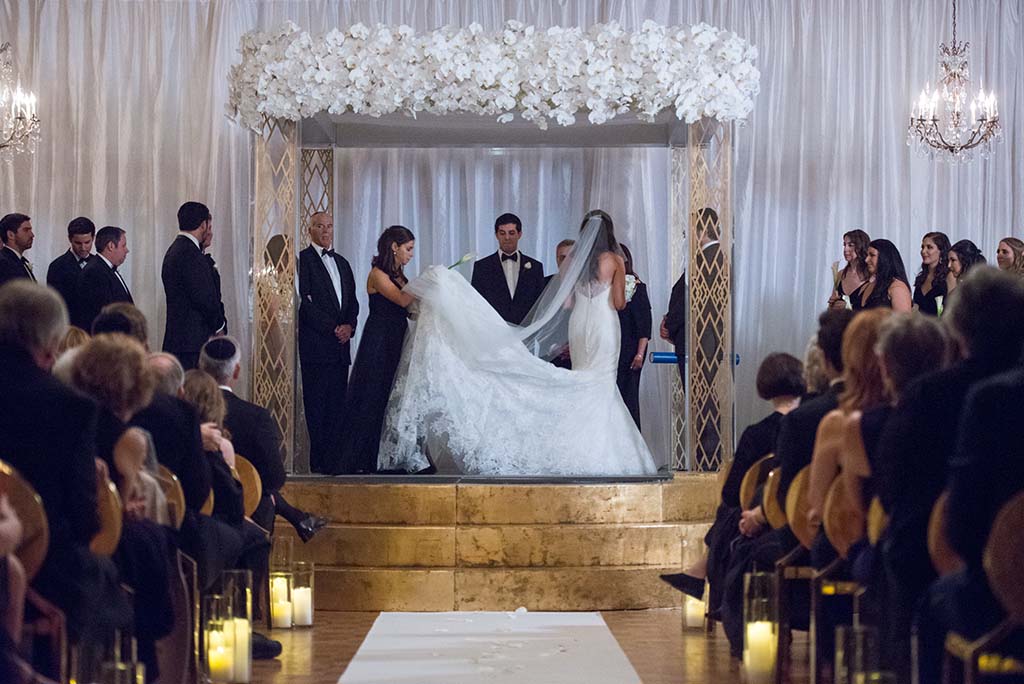 The wedding ceremony at The Peabody Hotel

Shelley knew she could count on Janis to orchestrate a second winter wedding as fabulous as the first. “Since Jaclyn’s wedding was at the end of the month, it also gave us a little more breathing room after the holiday shopping craze.”

“Planning with Shelly, Jaclyn and David was delightful,” said Janis. “Jaclyn and David had a general idea about what they wanted, and put their trust in me, the florist and the other vendors that were recommended.” 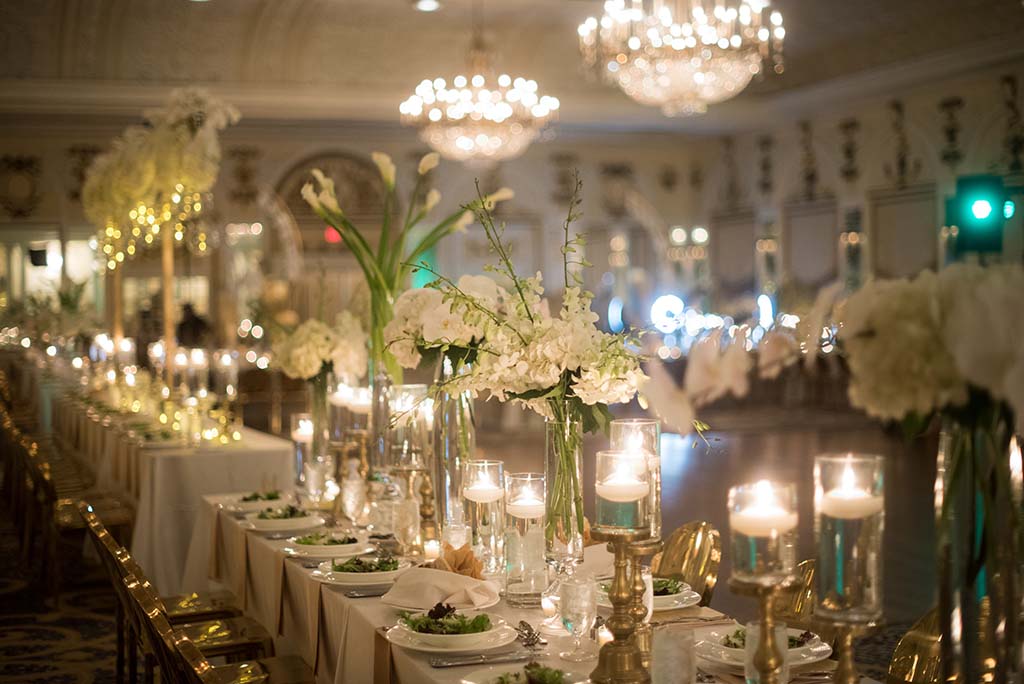 “David and I wanted a wedding that was classic, timeless and not over the top,” said Jaclyn. “We decided upon a neutral color palette of black, white, silver and gold.”

After choosing the planner, location, florist, band, other essentials, Jaclyn, her mom and sister shopped for her gown in Chicago. “I tried on many dresses at various stores prior to finding the one,” said Jaclyn. “My dress was very different from anything I ever envisioned myself in. I always thought I would wear something plain and timeless. Instead, I ended up in a Vera Wang gown with a lace halter and an illusion neckline. I had never seen anything like it. I felt comfortable in the dress and that’s why I fell in love with it.” 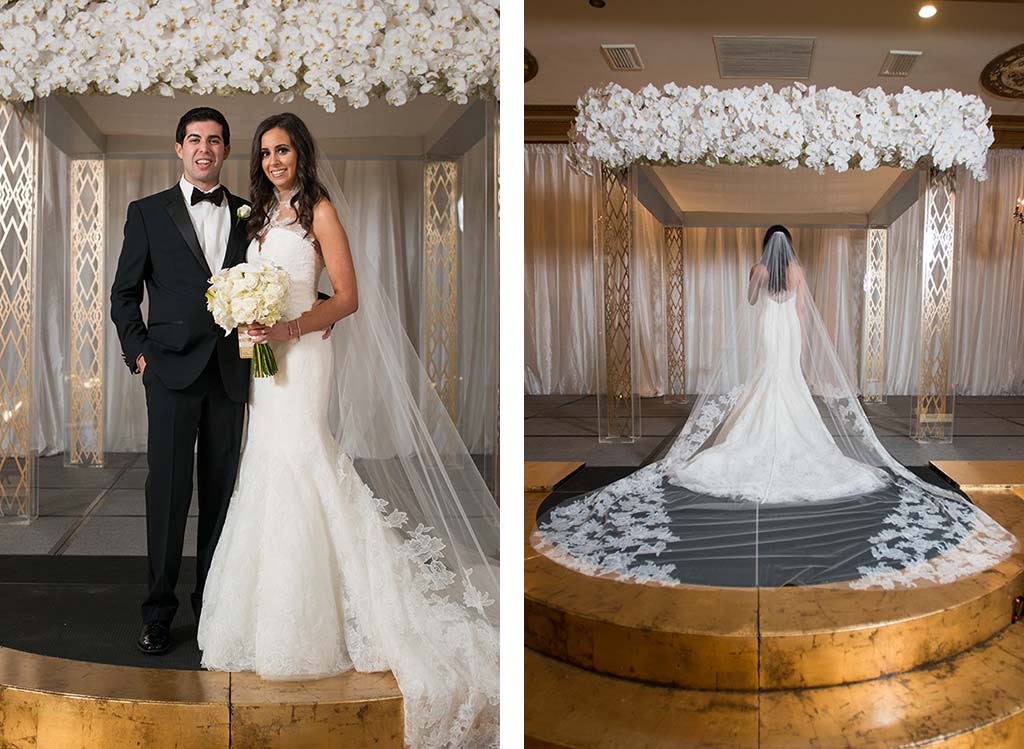 The couple chose the January date with a purpose. “We wanted an Orthodox ceremony with Rabbi Levi Klein from Chabad as our officiant, and we wanted our wedding on a Saturday night, not a Sunday as is customary,” explained Jaclyn. Timing was key since a Jewish wedding cannot begin before sunset on Saturday – the end of the Jewish Sabbath. The shorter days in January allowed them that luxury.

With David’s parents, Alan and Karen Bragman, living in Atlanta, David’s brother, Adam living in L.A. and bridesmaids, groomsmen and guests coming from out of town, the couple wanted their family and guests immersed in a complete Downtown Memphis experience. “Nothing says Memphis like the Peabody,” said Jaclyn of its timeless ambiance. 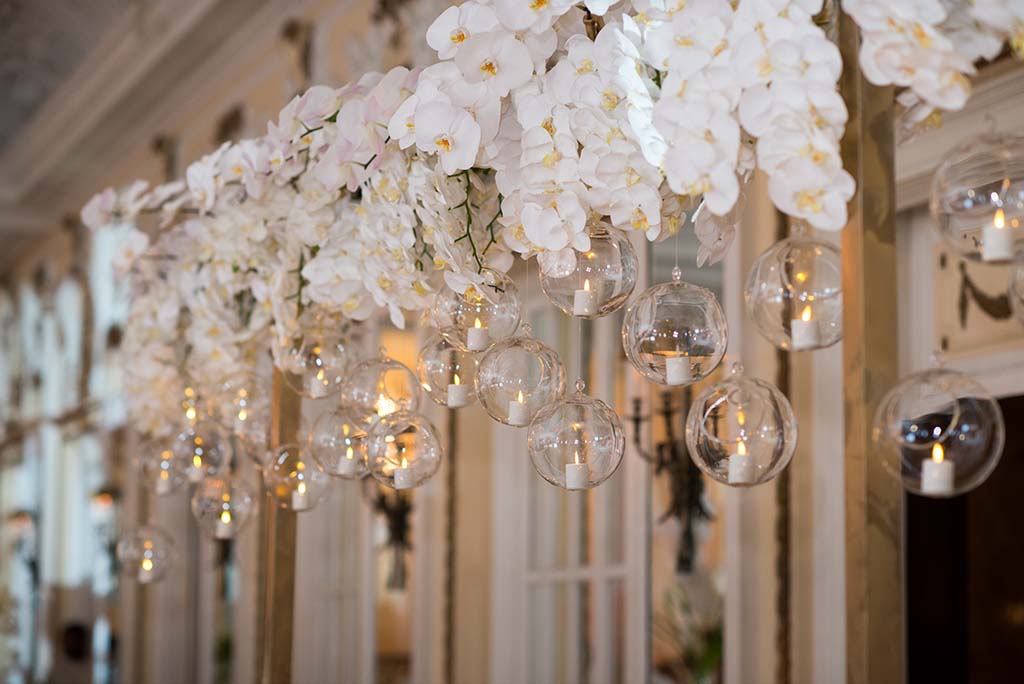 The rehearsal dinner was held in the remarkable space at the Halloran Centre for Performing Arts & Education next door to the Orpheum Theatre and was catered family style by Felicia Suzanne. The Saturday ceremony and reception, and Sunday brunch were held in The Peabody, where guests and the couple spent their wedding weekend.

Jaclyn’s requests – keep it simple and elegant and to use orchids as the main flower, had even her a little anxious. “I love orchids and the purity of them,” she said. “But I was concerned they might look bare as centerpieces on the table. When Heather at Holliday Flowers and Janis told me to trust them, I never expected the centerpieces to be metal sculptures of my favorite flower!” 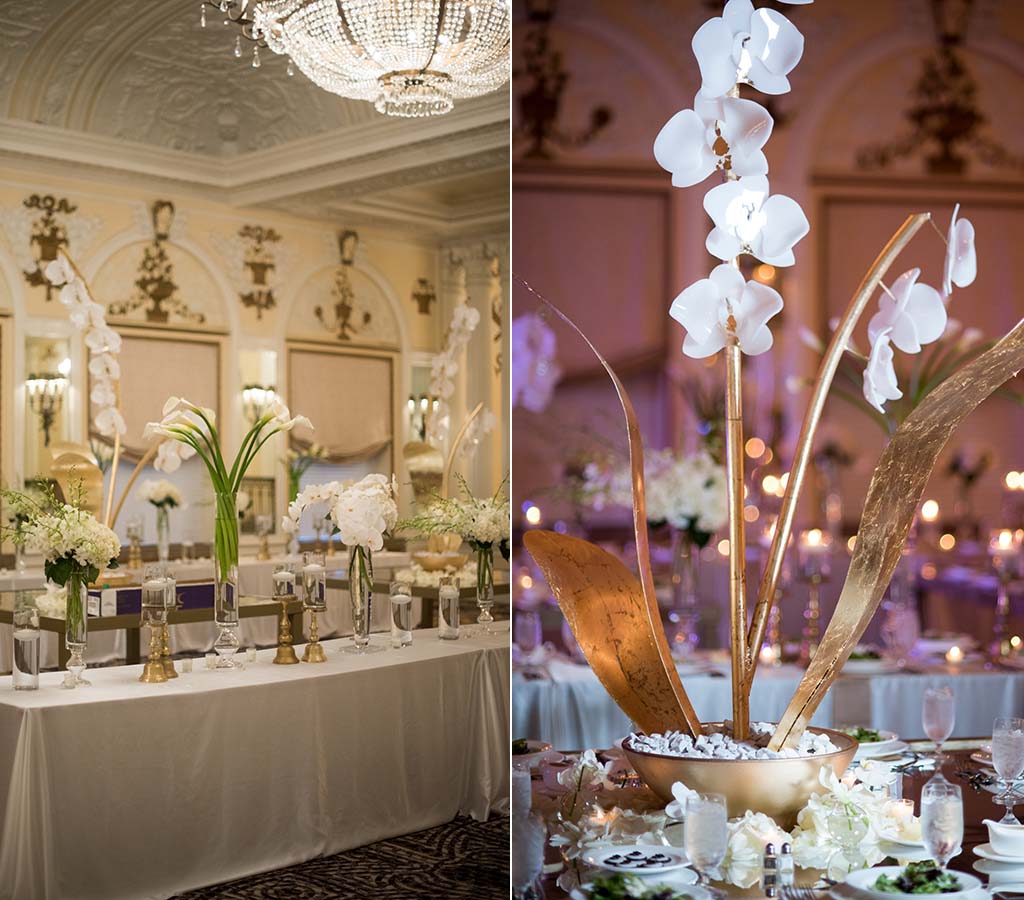 The bouquets and Chuppah were a mass of white anchored by orchids with other floral filling in the space. “The aroma was amazing. It was more than I could have imagined.”

“It was breathtaking,” said Shelley.

“The wedding was exquisite and the room full of love,” said Janis. 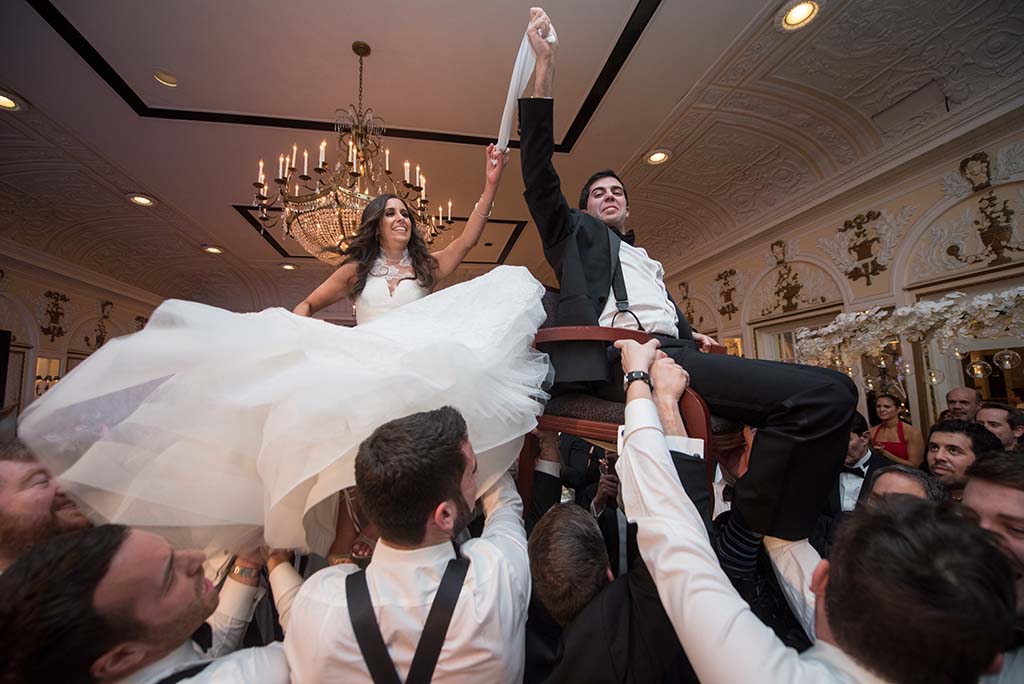 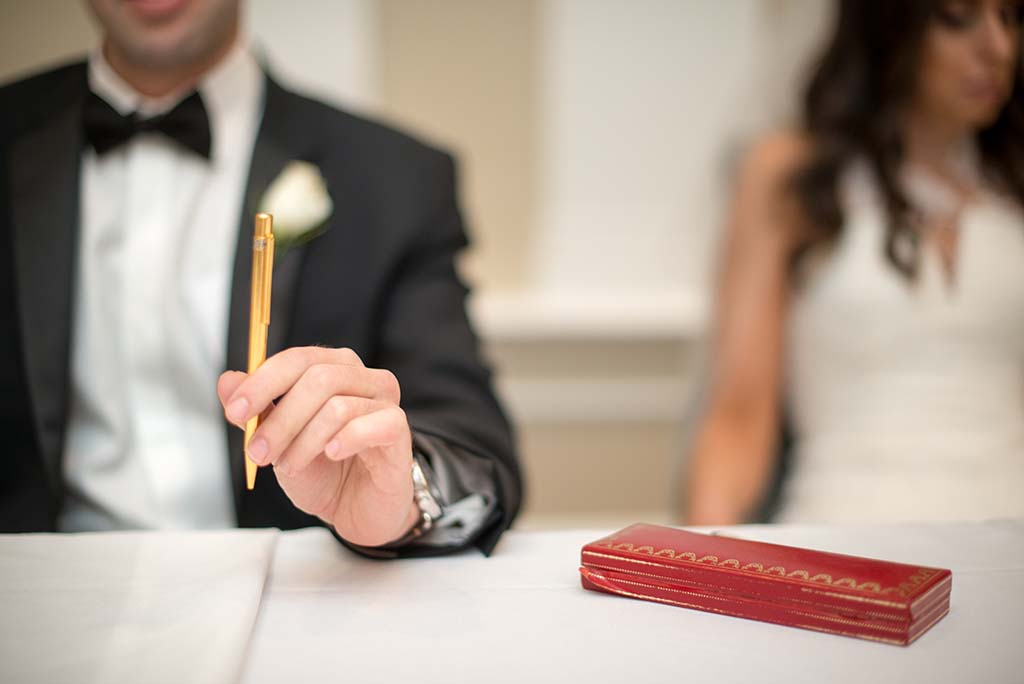 The pen used to sign the Ketubah was once the pen David’s grandfather used to sign all of his important documents. 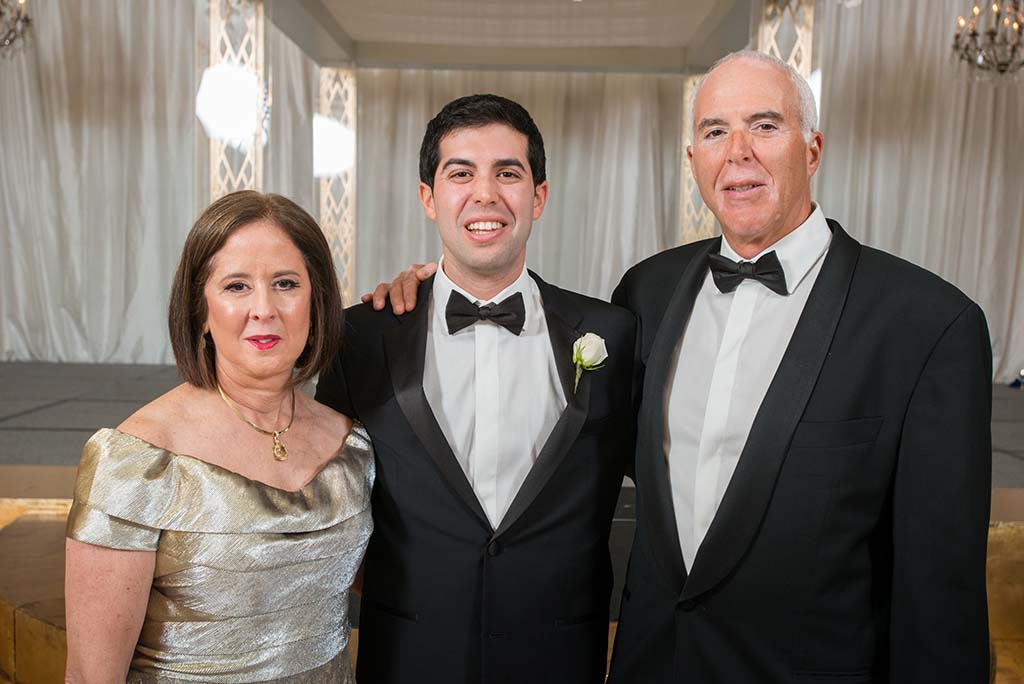 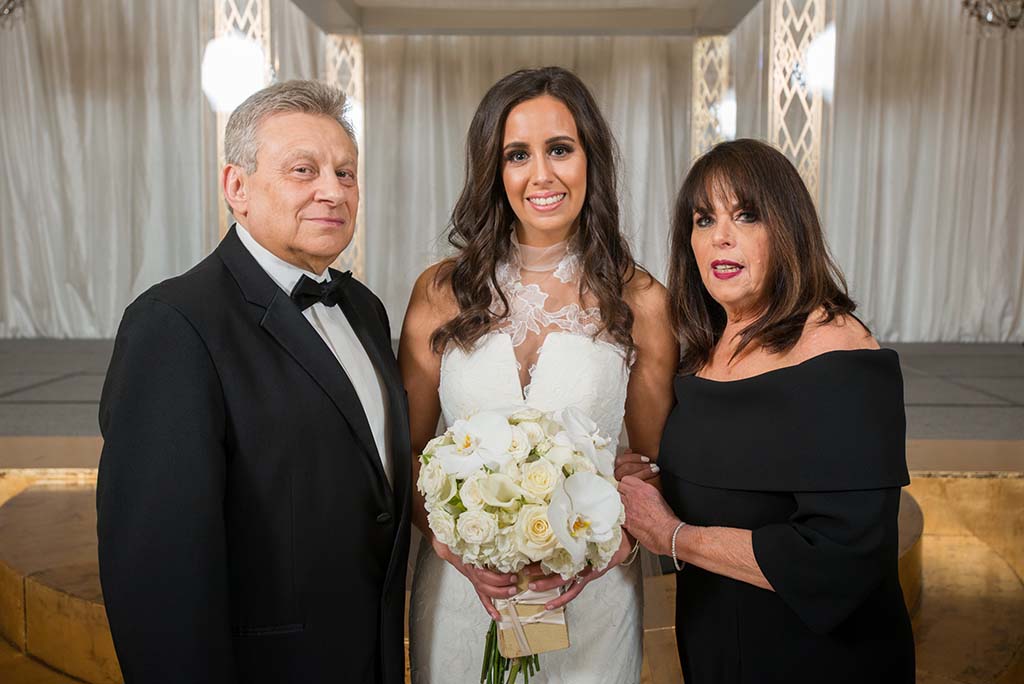 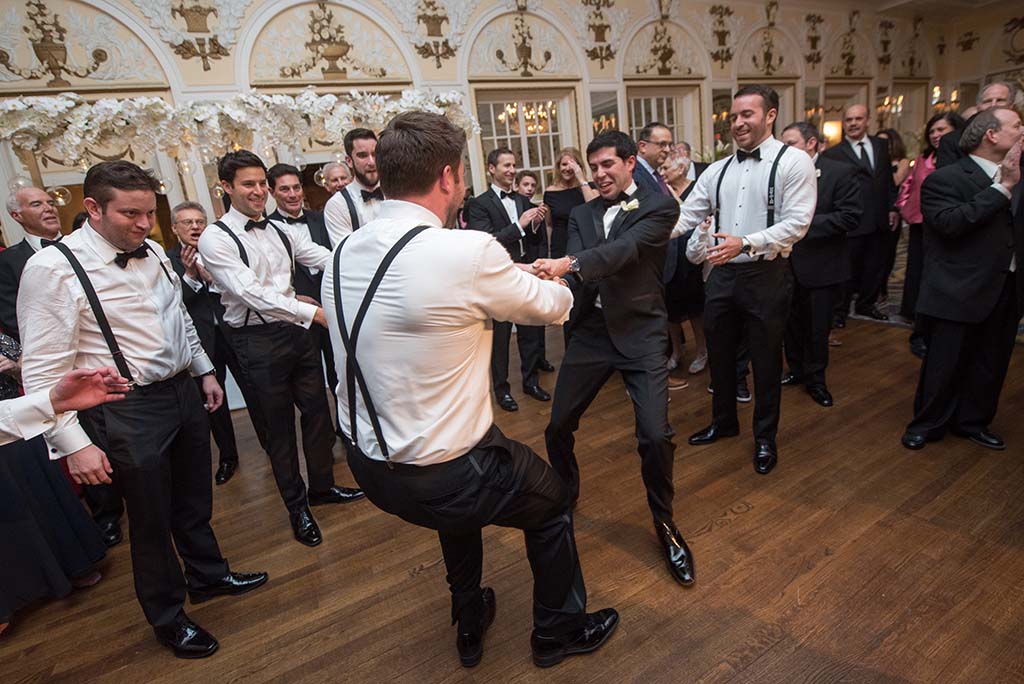 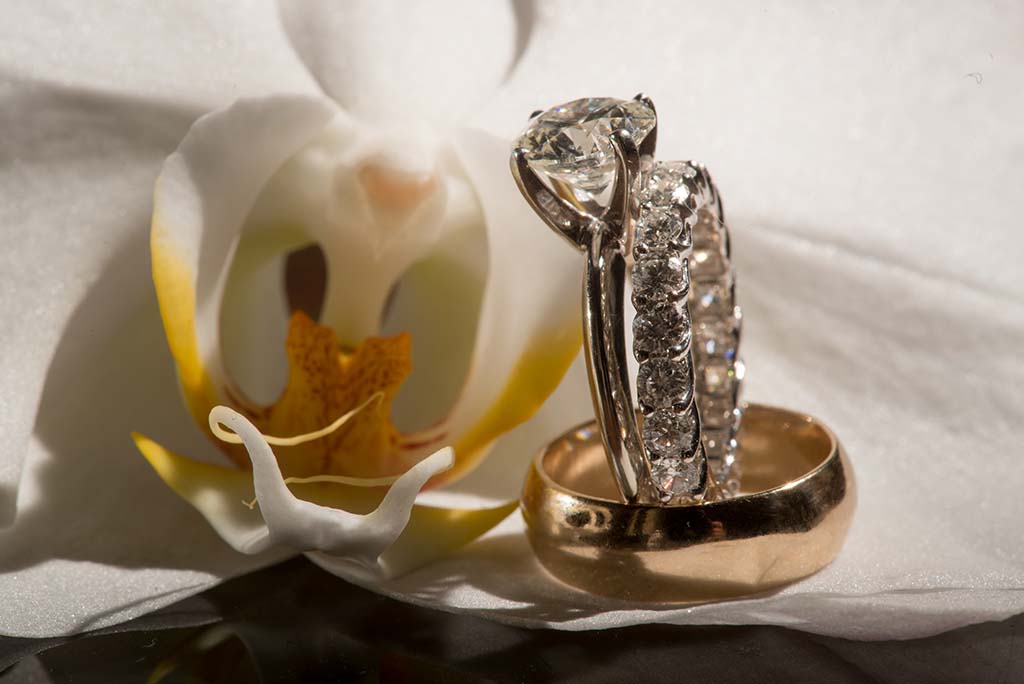 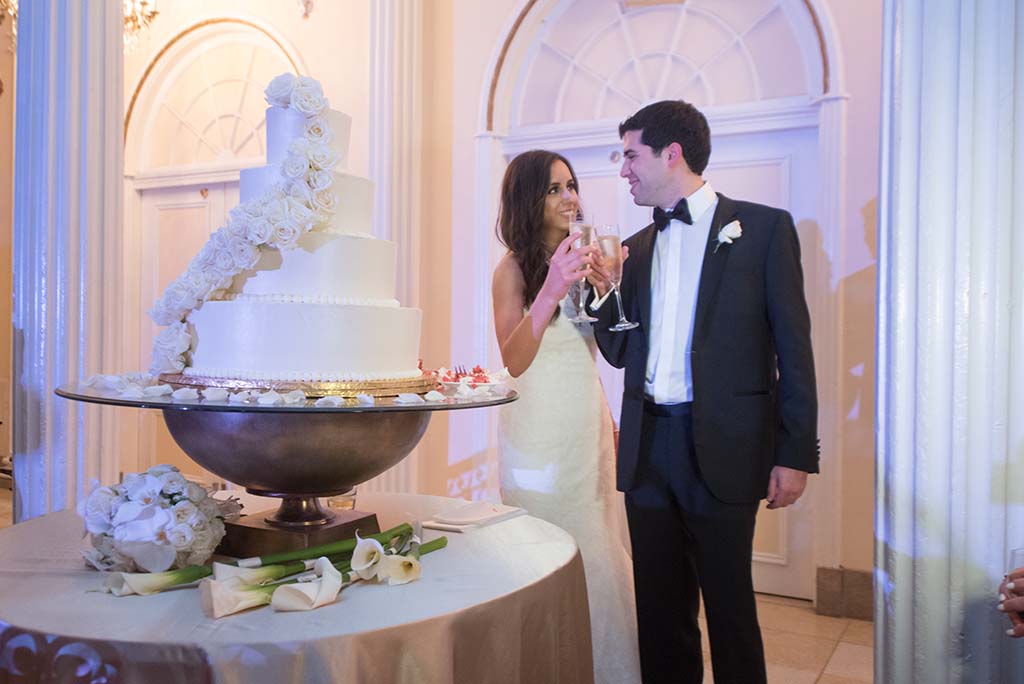 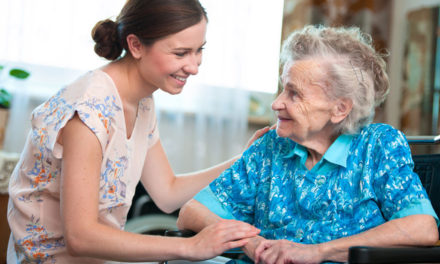 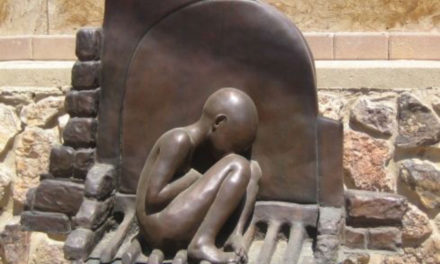 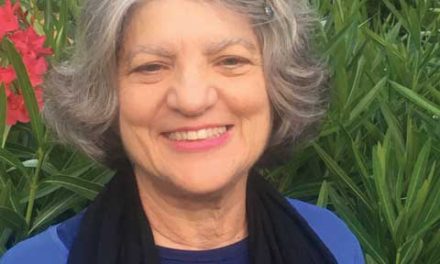